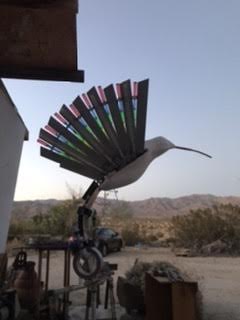 Bernard Hoyes currently resides in Palm Springs, California. His exposure to revival cults, ceremonies and rituals while living with a great aunt in rural Jamaica, planted deep seeds that would later manifest in his art.  He began painting at an early age, studying at the Institute of Jamaica Junior Art Center.  At fifteen he moved to New York City to continue his academic and artistic endeavors; classes at the Art Students League introduced him the Summer of 68, Art Camp in N.Y.C. He furthered his studies at Vermont Academy in Saxton River, VT, and in 1974, received a B.F.A. in Painting from California College of Arts and Crafts in Oakland, CA.
Hoyes uses several mediums, including watercolors and oils to create his vibrant, colorful images.  During the 70’s he, worked intensively on his “Rag Series” which symbolizes, documents and prophesied his journey from a struggling artist to one of prominence.
In the early 80’s he began works that reflect his Afro-Caribbean roots, specifically the rituals of African spirituality and Christianity with a heavy emphasis on the roles and power of women, especially in the realms of music, dance and magic.
Hoyes also creates sculptures, and is currently working on a three acre sculpture garden at his Desert Hot Springs studio, Syncona Mesa where he has resided full time since 2013.
He founded Caribbean Arts, Inc. in 1982 to publish and distribute his fine art prints with success; and has participated in numerous solo and group exhibitions here and abroad. Hoyes’ was part of the “Places of Validation, Art & Progression” exhibition organized by the California African American Museum as part of the Getty initiative “Pacific Standard Time: Art in LA 1945-1980”.  The 2007”Lamentation and Celebrations” exhibition at the Loves Jazz and Art Center in Omaha, NE. was his 25 year celebration in the arts.   His sojourn to China to live and work with Stonemasons to create a Blue Fin Tuna Commission is well documented.
In 2009, he completed a three city exhibition tour of Europe that included an Artist residency in Amsterdam, Netherlands.
Several Hoyes murals can be found in the inner city of Los Angeles. In 2012, seven of his iconic paintings came to life in “Se7en Paintings, a Story in Performance” at the Ford Theatre in Los Angeles.  A production using dance, music, video and visual arts to weave together a tale rooted in Jamaica’s spiritual traditions.
His works have been featured in numerous television and film productions, and has won Awards of Excellence for his “Revival Series”.  Oprah Winfrey, Natalie Cole, Steve Harvey, Keenan Ivory Wayans and the National Urban League are among his collectors.
Hoyes has developed a non-toxic etching process using an Electrolyte process.  In the summer of 2006 he introduced Kensington Press Revival to the art community in Kingston, Jamaica; an Atelier for printmaking that shares Electrolyte etching with local Artists. He has given demonstrations at the Riverside Art Museum and the Palm Springs Art Museum.

In November 2019, he was featured in a solo Exhibition at San Bernardino County Museum. “Spirit of the Land through Climate Change” 30 watercolors expressing his observations of the Deserts and it’s reaction to Climate over the past 30 years. Was covered in https://art-highlights.com/AHMFB042520X
He has painted Murals in L.A. Worked with the Palm Springs Art Commission to Paint a Major Mural for the Church of St Paul’s. Collaborate with Kingston Creative to begin a Murals Program to revitalize the Downtown in Kingston, Jamaica. He is currently developing a Public Sculpture for Destination Crenshaw. He just completed a 4x4x10 steel and Lucite Public placement Sculpture commission for Kingston Restoration.
www.bernardhoyes.com 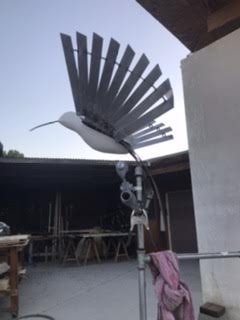 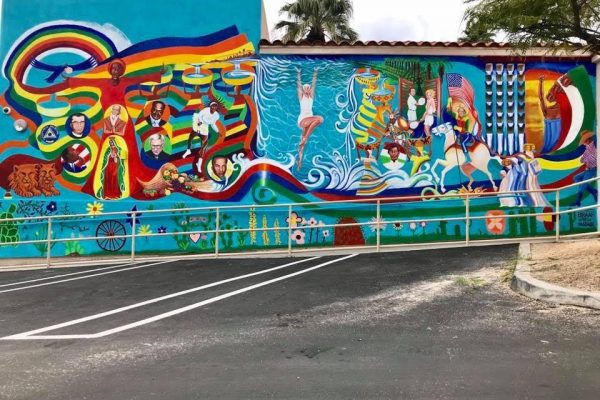 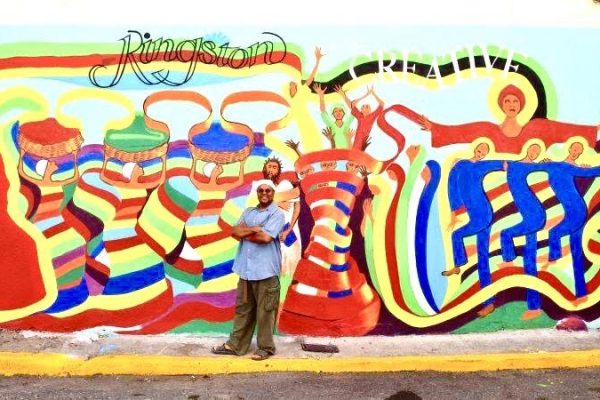